FORT PORTAL - Uganda People's Defence Forces (UPDF) troops operating in Eastern DR Congo have been told not to worry about Ebola outbreak in the region.

Bakehena reassured UPDF troops operating in Eastern DRC that their health is guaranteed as far as Ebola outbreak in DRC is concerned.

The assurance was made at the closing ceremony of UPDF Mountain Division Medical Personnel Rapid Response Team training on Ebola Case Management held at Kalya Courts in Fort portal city.

“As UPDF Directorate of Public Health in conjunction with Ministry of Health and World Health Organization, we have put in place safeguard contingency measures against our soldiers operating in DRC contracting Ebola viral disease,” Lt Col Dr Bakehena assured.

He added that although the target is Ebola control, other health hazards such as monkeypox, Marburg and other Hemorrhagic fevers that are prevalent in DRC are being catered for. 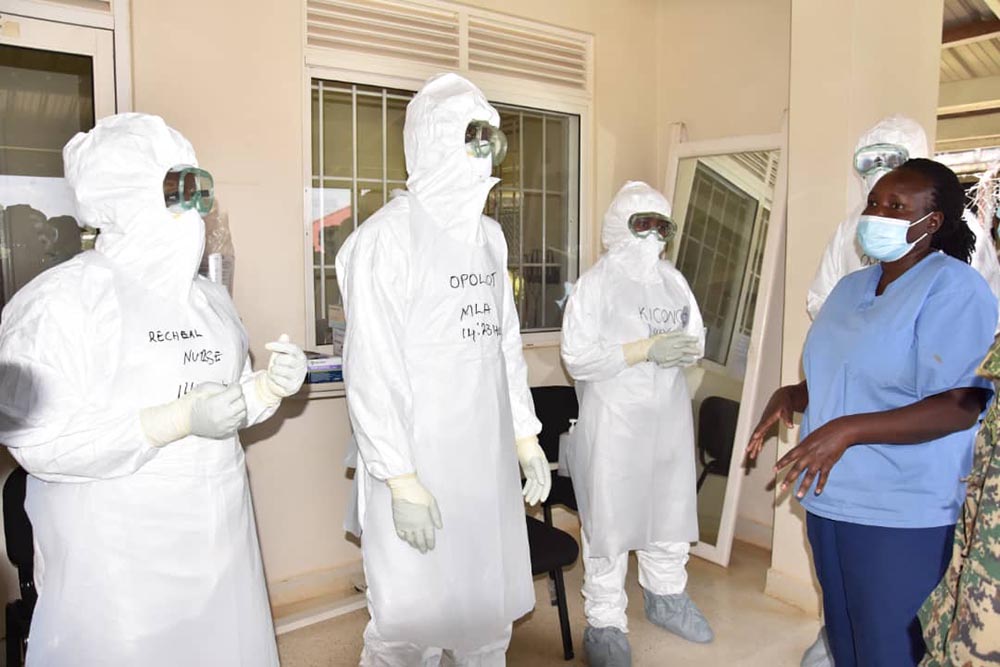 The five-day training workshop of 32 UPDF Medical personnel from the Mountain Division was aimed at creating a Rapid Response Team (RRT) in surveillance, Infection Prevention and Control (IPC) and Case Management. (UPDF Photo)

The five-day training workshop of 32 UPDF Medical personnel from the Mountain Division was aimed at creating a Rapid Response Team (RRT) in surveillance, Infection Prevention and Control (IPC) and Case Management.

It was intended to impart knowledge in detecting, identifying alerts and early warning of Ebola viral disease outbreaks within and the surrounding communities where UPDF is operating in Eastern DRC.

“Currently there are reports of Ebola outbreak in DRC 2000kms (Mbadaka Health risk zone) away from where our troops are operating. Although authorities in DRC have declared the country Ebola-free, we do not want to take chances.

That is why we have put in place contingent measures/ stop gaps such as surveillance systems, medical personnel case management and rapid response teams training,” Bakehena insisted.

He stressed that they intend to vaccinate all their troops operating in DRC and those at the borderline right from West Nile up to Kisoro, adding that soldiers have also been put on alert to report anybody with ebola signs.

Capt Dr Daniel Okello, the Mountain Division Medical officer and overall Operation Shujaa doctor, who was among the Rapid Response Team trainees, alerted the officers on how to prepare, approach and respond to Ebola viral outbreak.

“Community engagement and sensitization are very important as far as prevention of Ebola is concerned. We need to educate the risk hazard population on wearing thick clothes while slaughtering wild animals, thorough cook wild meat, constant hand washing, how identifying signs and symptoms and how to report case alerts. These are going to be our core priorities in the operation theatre,” Said Dr Okello.

Currently, there are no signs of Ebola virus disease within Operation Shujaa area of operation.